Great News! Solar Sales Inc will be installing (2) 10 kw PV systems and (2) Solar Hot Water Heaters within the next 4 months! All the applications we submitted for Florida Power & Light (FPL) solar rebates were approved and our projects will continue.
Posted by Solar Sales Inc at 4:50 AM No comments: 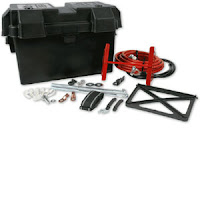 Battery Boxes help maximize the life of your battery. When a battery needs to be left outside or is exposed to water or other environmental elements the box creates a protective seal. This seal also protects against sunlight, rain, dirt, oil, and gasoline.

Battery Boxes have two parts: the base & the lid. The base prevents batteries from shifting and collects any spilled acid. The lid allows for easy access to the batteries for maintenance or altering cable configurations. We offer boxes made from plastic (polypropylene and polyethylene) and aluminum. Aluminum boxes are popular with high performance vehicles, due to their light weight.

Some of the battery boxes also meet the National Fire Protection Association, Solar America Board, and the National Electric Code for Codes (NEC), Standards and Suggested Practices for Photovoltaic Application Articles 480, 690-71, 72, 73. The battery boxes that meet these requirements are the BOX-6VGC, BOX-DUAL-6VGC, and the BOX-DUAL-L16. 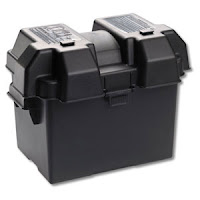 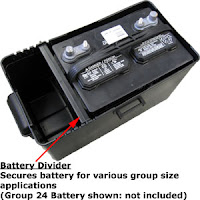 Posted by Solar Sales Inc at 12:08 PM No comments:

In the wake of the aftermath of one of the most powerful tsunamis to hit Japan, they were faced with their Nuclear Power Plant shut down and had to rely on substation breakers to keep the grid in balance. A system of rolling blackouts was created so that they will have a supply-limited grid. The government went directly to the people, asking them to reduce consumption during peak hours so that the economy, and jobs, may continue uninterrupted. This helped to keep the grid working in the short term.

Now, Japan is faced with rebuilding their energy infrastructure and are considering Smart Grid Technology. Smart Grid Technology helps keep the grid in balance by using smart meters that allows grid operators to let consumers know what behavior is need. "It uses price signals and command signals to increase the real-time price of electricity and let the appliances figure out when to run based on the cost. If peak loads near a critical point, the grid could command some air conditions to shut down for an hour," says Dan Bihn of Solar Today magazine.

Its a great opportunity for Japan to integrate renewable energy like solar and wind technology into their power grid. By using the same price and control signals, the meters can determine whether to use wind power generation or solar power generation based on the condition of the environment (windy and cloudy versus no wind and sunny). Prices will drop and price-responsive loads will buy the cheaper power. This keeps the grid in balance without needing to add new, potentially hazardous, power plants.

Denmark has a large test project doing exactly this. It would be great if more industrialized countries, like the United States, would integrate SMART GRID TECHNOLOGY into their power grid and reduce our consumption of fossil fuels and oil dependency.
Posted by Solar Sales Inc at 11:16 AM No comments:

According to the International Solar Energy Society - "Passive Solar Architecture is solar energy and resource optimizations applied to our built environment. Therefore passive solar is a highly integrated endeavor affecting the design professions, architecture, city and regional planners, structural, mechanical and civil engineers, landscape architects and product designers. As such passive solar design is equal parts art, science and technology...If passive solar applications can become a pervasive and rigorous part of these efforts we can have hugely beneficial effects on our looming problems of fossil fuel depletion and climate disruption."

The elementary relationships between energy production, use, and efficiency are the first considerations in passive solar design. Efficiency, effective operation with a minimum of waste, must relate to both production and use for the whole to be efficient. Our industrial society has so isolated production and use that very few people think about their use of energy. The result is while we've become more efficient with production we've also become very wasteful with our use of energy, especially in buildings.

If you can, it is of great benefit to integrate passive solar architecture into your solar energy system to be as energy efficient as possible. Your solar energy system will be more effective and efficient. For more information on passive solar architecture, stay tuned and we will continually provide technical information or give us a call with any questions you might have. We are glad to help.